The Black and Gold Wave by Roger Brunelle

Before the November 2018 election, there was much talk about the “Blue Wave” that was coming in the midterm elections. What occurred for DC 35 was a “Black and Gold Wave!” 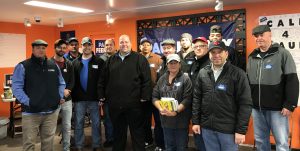 Across our jurisdiction, DC 35 took great care in endorsing candidates that put working families’ issues first. We supported candidates that were committed to protecting workers rights and pledging to be a partner in our fight to obtain employment for our membership. DC 35 candidates, incumbents and challengers won almost 90% of their races. What is more important than the total wins is where these wins actually occurred.

The greatest win of the midterm elections occurred in Maine, where IUPAT DC 35 member Troy Jackson (LU 1887) was reelected to his State Senate seat. He is now joined by 21 other Democrats, giving them the majority and control of the Maine State Senate. Troy is now going to be the President of the Senate where he will guide legislation supportive of working families to the Governor’s desk. That Governor is now Janet Mills, who has been an ally to organized labor as Attorney General. This finally completes the circle with the Maine House of Representatives, having widened the margin of a Democratic majority.

This also gives Speaker of the House (and longtime friend of DC 35) Sara Gideon some much-needed support for our issues. Speaker Gideon and the House of Representatives were the only backstops to many anti-worker bills filed against us in recent years. For eight years under the anti-working family agenda of Governor Paul LePage, DC 35 and all of the organized labor had to spend enormous resources defending what we had gained. We’ve spent those years fighting for every inch of progress for workers and job opportunities. We now have a chance to strengthen our positions and hopefully regain some market share that we have lost to the non-union sector that was under the protection of LePage and his administration. We also have the opportunity to have a voice on the appointments that Governor LePage makes to Boards and Commissions that can aid us in our goals.

New Hampshire also has flipped to a more worker-friendly Statehouse. The State Senate and House of Representatives moved back to the control of the Democrats. Pro-union Senator Donna Soucy became Senate President and pro-union Representative Steve Shurtleff became Speaker of the House. Both have been longtime allies to organized labor and will be great advocates for our values now that they are in leadership roles. The Executive Council election also flipped and sits in our favor as 3-2. This Council votes on all awarded state contracts over $20,000, thus allowing us to be heard when bad actors are bidding against us in New Hampshire and winning contracts by not paying livable wages and benefits. Most of the pro-union Republicans also held their seats: 20 members of what Governor Chris Sununu called the “Dirty 30” that we supported were reelected. The “Dirty 30” is the term Sununu gave to the Republicans that stood with us and voted against the anti-union ‘Right to Work (For Less)’ bills that he tried ramming through the Legislature in 2017. 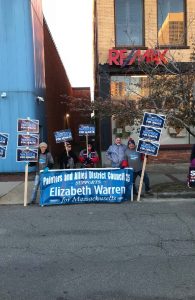 Vermont went as expected. As did Massachusetts, with Elizabeth Warren, Maura Healey, Bill Galvin, Susanne Bump, and Deb Goldberg being reelected, but we had hopes of Jay Gonzales being able to overcome an uphill battle to unseat union buster Charlie Baker. Jay was up against a large war chest of political contributions to the Baker campaign. His campaign finance reports read like a ‘Who’s Who’ of developers, wealthy business owners, health care executives, and 1 percenter. The independent expenditures from outside groups totaled in the millions for Baker. Even against those odds, Jay Gonzales still carried his message to the voters and never gave up. We congratulate him on a hard-fought campaign.

Also in Massachusetts, we saw IBEW member Paul Feeney reelected to his first full term as State Senator. Paul is the only card-carrying union member in the Massachusetts Senate. In the short time since his special election last year, he has moved the needle in the Chamber and has held his ground on labor issues. Union member Jim Hawkins won tough reelection to his first full term as State Representative in the 2nd Bristol District. Jim is joined by a union member and first-time candidate Tram Nguyen as State Representative from the 18th Essex District. Jim and Tram are only 2 of 5 card-carrying members in the House of Representatives in Massachusetts and we look forward to the future with them as elected officials. 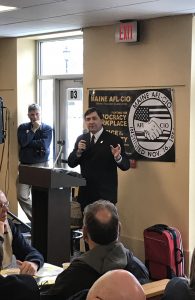 Something else also occurred this year, and it was true across our jurisdiction and our country. We had more card-carrying union members on the ballot in the September Primary and the November General Elections than ever before. Hundreds of union members put their name on the line for working families, some were not successful but others were. We commend the members like our own Tommy Falter from Local 1044 who stood up and gave it their all. Regardless of the outcome, they all deserve our gratitude for enduring the process and putting their families and friends through the roller coaster ride of campaigning.

Those that succeed now have to navigate the perils that live in the State House or in Washington DC. IUPAT DC 35 will be there to remind them of the promises and pledges that they have made. Every member plays a part in our success and when we stand together and speak as one voice we are unstoppable.

WHEN WE VOTE, WHEN WE FIGHT, WE WIN!