The United States Supreme Court dealt two blows to working people at the end of its 2018 term. Make no mistake, these decisions are serious body shots to the average worker; but they won’t put us on the mat unless we let them.

The decision in Epic Systems v. Lewis allows companies to legally obligate its workers to sign waivers of “class action” lawsuits that would prevent an employee from participating in a joint court action against their employer. It appeared as if the National Labor Relations Act protected the rights of workers to bring collective actions, but a 5-4 decision the Supreme Court sided with large corporate interests. Groups of workers who are being wronged by their employer will no longer be able to join together to pursue legal action if they signed a class action waiver, as many companies require. Now, workers will have to individually pursue legal action against employers. This makes it highly likely that much improper jobsite activity will go on without correction. This decision was definitely pro-corporate interests and was intended to silence the voices of working people.

In the most publicized Supreme Court decision of the year, Janus v. AFSCME, the Court handed down another 5-4 ruling stating that it was a First Amendment violation to require non-member employees to pay agency fees to the public sector union that provides them services, impacting laws in 22 states. Now, public sector workers can choose to pay no fees but get all the benefits of being a union member, including contract negotiation and the processing of grievances. It is no coincidence that Mark Janus, the plaintiff in the case who was an Illinois state employee, has since left his job and taken a position with the big business think tank that funded his lawsuit all the way to the Supreme Court.

Large corporate interests will stop at nothing to stifle the voices of working Americans. They now have a majority of Supreme Court justices to advance their backward agenda. Working people must respond. This decision will make it more difficult for unions to do their job and will diminish the political power of middle-class America. Please educate yourself about the realities of this decision. Even though the Janus decision applies only to public-sector unions (our building trades unions are private-sector unions), there is no doubt that the anti-worker movement has all of organized labor in its crosshairs. We must be informed and ready to respond.

Some Massachusetts political leaders have indicated a willingness to enact legislation that will soften the blow of the Janus decision and I am part of a group reviewing possible responses to the ruling. Look for updates in future editions of this newsletter.

I also want to provide an update on an earlier piece that spoke of President Trump’s changes to the tax code. Despite extravagant promises that the corporate tax cuts would result in increased wages for the average worker, recent statistics are proving the opposite to be true. While it is true that unemployment is down, recent Bureau of Labor statistics reveal that real wages are not rising. This is a direct result of the decrease in worker power brought about by the Trump administration, the Supreme Court and big business. Across all sectors of business, corporations are taking the money from the tax breaks in the form of added stock benefits and other perks instead of increasing wages. There is a direct correlation between decreasing the power of workers and a lowering quality of life for these workers and their families.

However, there is some good news. Unions and workers across the country are bringing about a rebirth of the union movement. Workers from all industries and demographics are starting to understand they must stand united to bring the change needed in society. Unions aren’t a thing of the past. Despite the forces trying to bring our way of life to an end, working people across the country are collectively raising their voices to say unions are our future. We’ve faced long odds before and emerged victorious; don’t bet against us.

Roger Brunelle’s piece in this Newsletter discusses some of the political campaigns the District Council is working on but I wanted to draw your attention to the race for Congress in Massachusetts 3rd Congressional District. Dan Koh is a first-time candidate running for this important seat. Dan was the former chief-of-staff to Mayor Marty Walsh and has returned to his childhood home town to run for office. Dan has always understood the critical importance of a strong, unionized labor force and he has always put his money were his mouth is when it comes to the daily issues that affect working families. He will bring attention to local issues in Washington and has committed to being a strong advocate for unions both here locally and across the United States. Dan has received the support of most of the building trades unions in Massachusetts because he is the right person for the job at this critical time in our history.

As unions take hits from all sides, Dan Koh is the person we need in Congress. Our members in towns like Lowell, Lawrence, Haverhill and Fitchburg have been volunteering their time for Dan and I urge you to learn about his ideas for working families and to vote on September 4th. 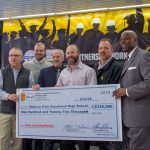 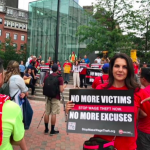 When we vote, We Win!News, Newsletter: Fall '18